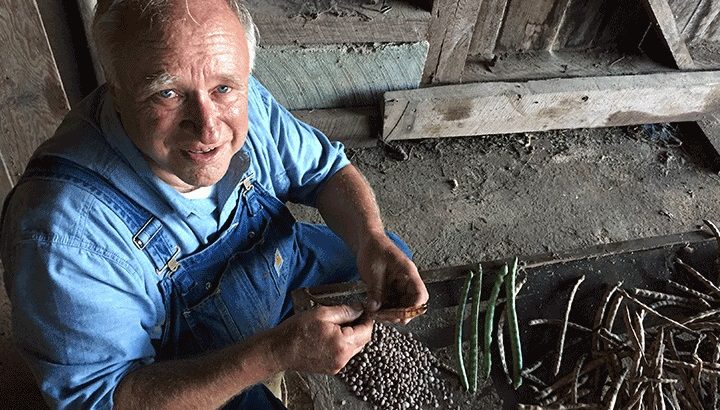 “The modern farm-to-table movement has renewed interest in heirloom fruits and vegetables. But long before the trend, John Coykendall has been on a mission to preserve rare heirloom seeds and document their heritage.

“We lost so much over time. That’s why it’s so important now to save what’s left,” says Coykendall, the master gardener at the luxurious mountain retreat Blackberry Farm in his native Tennessee.

Coykendall has more than 500 varieties gathered from small farmers and backyard gardeners around the world. The bulk of his collection comes from the American South — Appalachia and here in rural Washington Parish, La., near the Mississippi state line.

“It’s the unique sense of place that you find here,” he says. “They’ve retained their sense of integrity, character, way of life, farming ways.”

On a recent visit, he stopped by the Circle T Feed and Seed in Franklinton, La.

“For me it’s especially the seed,” he says, walking straight to the back of the store to an aisle of cardboard bins filled with vegetable seeds.

Dressed in denim overalls, Coykendall rummages through the seed sacks looking for varieties you can only find here — like the Louisiana purple pod bean.

“It makes a pretty bean — beautiful display growing,” he says. “The pods are solid purple but when you cook these, once the steam hits them, they turn green again.”

Coykendall is like a walking, talking seed catalogue. For nearly half a century, he’s been collecting seeds and the stories of the people who grow them.

Coykendall keeps detailed journals of all of his seed expeditions, something he calls “memory banking.”

“A little bit of ancestral history,” he explains. “Where you were living? Where did this seed come from? Did it come from your grandmother or grandfather? Was it brought here from somewhere else? How do you grow it? How was it cooked?”

He’s a trained artist as well as a seed preservationist, so the journal entries include lovely drawings of the seeds, their plants and the surrounding landscape.

“They’re little artifacts, each one of them,” says Louisiana producer Christina Melton. She’s helping Coykendall organize his journals into a book. There are more than a hundred of them.”

“Knowing the history of our food, he says, is part of knowing who we are.

“And if somebody doesn’t record it, put it down, it’s going to be lost for all time,” he warns. “That goes for the seeds. This is the living part of it. Living heritage. Our agricultural heritage.”

Coykendall says the work has grown even more important as industrial farming practices threaten the old farming ways, and the bio-diversity of crops.

Some of his collection is available to growers through the Seed Savers Exchange — a non-profit group that preserves heirloom crops, and stores endangered seeds in an underground freezer vault in Iowa.”

“John Coykendall is a renowned heirloom seed saver, a classically trained artist, and Master Gardener at Blackberry Farm, one of America’s top resorts. Since 1973, he has made an annual pilgrimage to Louisiana, where he has recorded the oral histories, growing techniques, recipes and folktales of Louisiana farmers and backyard gardeners in more than 80 beautifully illustrated journals. He has saved and safeguarded rare varieties of the crops they once grew, and handed them back to the communities where they came from. “Seeds carry with them more than the potential to sustain people as food, they are living history of the people who cared and tended to them and cultivated them and passed them down. I feel 100-percent total obligation, I am the caretaker,” believes Coykendall. “This is what we’re working to save, this history, the heritage, the way of life, the way of farming, way of cuisine, everything to do needs to be preserved while its still here to be preserved.”

A Tennessee native, the 73-year-old Coykendall is a true Renaissance man and a celebrity in a growing movement that places a premium on farm-to-table cuisine and locally sourced, organic and heirloom food. He is a trained artist who studied at the Ringling College of Art and Design and the School of the Museum of Fine Arts in Boston, and he is well-known for his sketches of the pastoral landscape in which he works.

For nearly 20 years, he has been the Master Gardner at one of America’s most celebrated destination resorts, Blackberry Farm, in the Smokey Mountains of Tennessee. In his role at Blackberry Farm, he has also become one of the nation’s most important seed savers – locating, preserving and sharing nearly extinct vegetable varieties, once abundant in America and particularly in the South. While his efforts take him around the world searching for seeds and beans and the cultural knowledge of how to grow them, what inspires him most is his annual pilgrimage to a small Louisiana community he stumbled upon 40 years ago. Drawn to the Washington Parish area as a in the early 1970s, John forged relationships with local farmers in the community, where over the years he has served as a dedicated and beloved volunteer at the Washington Parish Free Fair and has painstakingly recorded notes, documented stories and created beautiful sketches in volumes of journals detailing an agricultural way of life that is at risk of loss across our nation.”

“”Deeply Rooted” was produced by Christina Melton for Louisiana Public Broadcasting, and features an original music score by Mike Esneault. Major funding was provided by Camellia Brand Beans of New Orleans, by the Louisiana Department of Agriculture and Forestry and by St. Louis Planting Company, Inc.”

Deeply Rooted can be viewed on UNC TV. 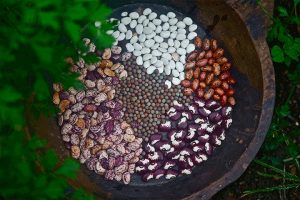