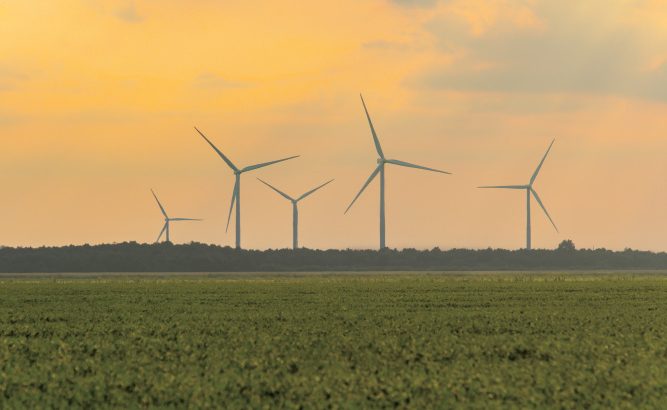 From NC Field and Family.

Horace Pritchard knew nothing about wind farming, other than what he’d seen on television, until one day he got a call from a company asking if he’d be interested in leasing some of his land for a few turbines.

“I thought they were doing energy for houses. I didn’t pay any attention to it,” says Pritchard, a 50-year veteran farmer who grows corn, soybeans and wheat on 1,300 acres in Perquimans and Pasquotank counties.

Two days later, the spokesperson from Iberdrola (now Avangrid Renewables) called again and Pritchard agreed to meet with him. After that, he says, “I talked to some of the people that had put wind turbines in with this company to see what they thought, and I got positive answers from everybody.” What’s more, says Pritchard, one of 60 landowners who signed on, “We couldn’t see anything else that we could farm and lose just a little teeny bit of land and get that kind of income out of it.”

In early 2017, the Amazon Wind Farm U.S. East began operating 104 turbines powered by Avangrid on about 200 acres (scattered over 22,000 acres) in the two counties. The first commercial-scale wind farm in North Carolina and one of the first in the Southeast, it delivers energy into a mid-Atlantic grid that supplies energy to Amazon Web Services cloud data centers. Much like water at a hydropower plant, the wind turns the blades of the turbines to generate electricity.

“Wind creates energy with no emissions, whereas other generation technologies can use a lot of water, emit air pollution or create waste that has to be dealt with in the end,” says Craig Poff, project developer at Avangrid Renewables. “Wind energy does not have those sorts of emissions.”

The availability of this reliable, clean natural resource, along with access to a high-voltage transmission line, made the flat land in the two narrow “finger” counties the perfect spot for a wind farm.

“We’re a bit inland from the Atlantic because of the way the gulfstream flows and the way that North Carolina kind of juts out into the Atlantic,” says Wayne Harris, economic developer for the Pasquotank County Economic Development Commission. “The wind in our area is very good. It probably would not have been good enough, say, 10 years ago, but as the turbines have become more and more efficient, this area, from a purely wind perspective, has become more attractive. The other thing that was very appealing [to Avangrid] is that there was not a single residential structure in that 22,000 acres.”

The rural community has already reaped multiple benefits. The Amazon Wind Farm U.S. East funnels $1.1 million annually into the local economy, including $520,000 in property taxes ($640,000 the first year), making it the largest taxpayer in both Perquimans and Pasquotank counties. During the 18-month construction phase, Avangrid employed approximately 30 local businesses, along with an army of more than 500 temporary workers, including 150 to 200 area residents ranging from electricians to truck drivers to surveyors. Together, they spent an estimated $18.5 million at local hotels, rental houses, restaurants, shops and other establishments. Seventeen permanent, highly skilled employees – about a quarter who are military veterans – now work at the site.”