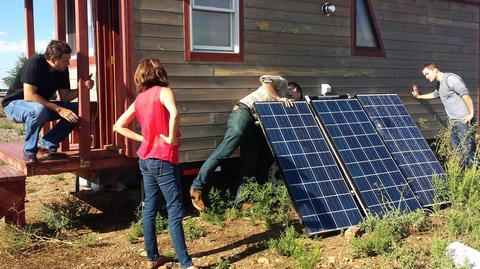 Description: Topic: Upcycled Art and Fashion. Rodman and Gina expand their artistic horizons at PalletFest, a festival dedicated to putting upcycled art and fashion on display. In the process, Rodman works with an upcycled fashion designer who makes clothing out of discarded bike tubes, squares off with Gina in a team based competition to turn shipping pallets into large sculptures and visits with eclectic artists turning trash to treasure.”

From The Denver Business Journal.

“Urban Conversion,” a television show that’s grown from a three-episode Colorado-channel run to an international audience, is going to expand even further next year, in part because of an investment from the state of Colorado.

Colorado Economic Development Commission members voted unanimously Thursday to offer film-incentive rebates of as much as $98,000 to the show, which is set to begin filming its third and longest season soon. All 17 members of the cast and crew are Colorado-based, and the city of Arvada will take a new starring role next year.

The show centers on conservative businessman Rodman Schley and his free-spirited wife, Gina Schley, trying to combine their passions and live a sustainable existence in an urban setting. Over the first two eight-episode seasons, the couple learned skills such as beekeeping and backyard farming and then put them work at their household.

For the planned third season, they purchased a 2.7-acre lavender and cut-flower farm in Arvada and plan to convert the mid-century modern house into a sustainable home. And they plan to increase the number of episodes from eight to 13, which will account in part for the $490,000 budget that they have for the season.

Rodman is the CEO of 9-Ball Studios, an Edgewater based company that has produced comedy specials and the Deepstacks Poker Tour series, among other projects. He launched “Urban Conversion” as a three-episode pilot on Rocky Mountain PBS but found an audience and grew it quickly.

From three episodes, it expanded to eight in the first season, and roughly 225 public-television stations picked it up from there. Create Channels, an arm of PBS that is shown both nationally and internationally, also has broadcast seasons one and two, and the show was picked up by affiliates as far away as Greece and Portugal, Rodman said.”