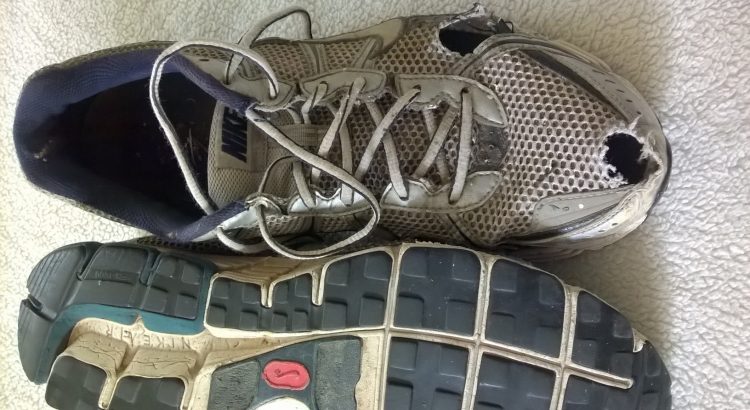 I had worn Nike Air Pegasus running shoes for over 20 years, that is until my last pair, bought over 5 years ago, developed holes after several weeks of wear.

I am a sprinter by nature and history.

Most of my adult life I would typically run 2-3 miles 3 times a week for conditioning. That is with the exception of the Hood to Coast run in the late nineties. That was 16-18 miles in 24 hours. And even then the Nike shoes held up.

I continued to use the holy shoes occasionally since I must run on grass due to my artificial knees.

I looked at the shoes recently with new eyes. The bottoms look little used. I thought, maybe I could repair them and do the job Nike failed to do.

I bought some ASICS a few years ago and they developed holes for the same reason, flimsy fabric.

I have confirmation of the flimsy fabric theory.

I have always repurposed my running shoes into working shoes.

I found a pair of Air Pegasus over 15 years old that I had stashed away.

I decided to cut out some sections of the mesh fabric to repair the holes. I also decided to coat the patched sections with Flex Seal.

That’s right, Flex Seal, which I recently used to seal a roof repair.

I had already tried it on the ASICS and so far so good. I used sewing thread on the hole first. 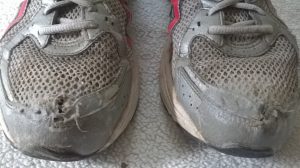 I am not sure if you can tell from this photo or not but the cut out fabric from the older shoes is substantially thicker and better constructed than the newer ones. 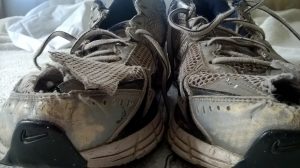 And this is after years of wear running and working!

Stay tuned for the patch results.