Chicken lady of Greensboro NC recycling food and love, Helping friends, Amy Murphy serves up comfort food and community to those in need 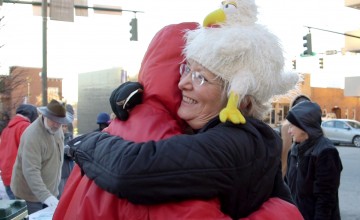 Chicken lady of Greensboro NC recycling food and love, Helping friends, Amy Murphy serves up comfort food and community to those in need

This quote from Amy Murphy, the Chicken Lady of Greensboro, NC moved me the most:

After watching this on UNC TV for the second time, I knew I had to put it on this site.

“Amy Murphy always knew she wanted to help others, but when she read a story about the homeless and hungry in Greensboro she knew she had to do something. Amy grew up eating fried chicken and considered it a comfort food.  She hatched a plan to help and comfort those in need with leftover fried chicken from a local restaurant.

Now three years later, Amy’s friends downtown have affectionately nicknamed her the “Chicken Lady” and every Monday morning you’ll find Amy and a host of volunteers serving an outdoor breakfast buffet in downtown Greensboro for their friends who live outside.”

From the Greensboro News record.

“Jeri Rowe: A Monday with The Chicken Lady

It’s a rainy Monday morning, an hour after sunrise beside Center City Park, and the people come to see the Chicken Lady.

They come for the free food. As they eat, they talk. They all have stories.

There is Steve LeGrande. He’s 51. He brings his four nephews, ages 5 to 9. Steve is no longer homeless. He’s got a place, and he’s better. He’s going to GTCC. But he remembers how hard it is searching the streets for food.

There is Michael Wells. He’s 57, an unemployed machinist. He lives under a bridge a few blocks east. He carries a backpack that’s at least eight pounds. It contains a blanket, a flashlight and two bottles of water.

There is Orlando Carr. He’s 45. He got laid off from his job selling flooring. So, like Michael, he’s homeless. And like Michael, he has a back pack. His is less than two pounds, with T-shirt, toothbrush and lotion.”

“The Chicken Lady – a woman known as Amy Murphy – stands in a parking deck at the corner of Friendly Avenue and Davie Street, huddled in a rain slicker.

She’s in front of a small card table loaded with food she has picked up: leftover bagels from Brueggers, leftover chicken tenders from a catered luncheon and leftover fried chicken and biscuits from Church’s franchise on Spring Garden Street.

She does this every Monday morning.”