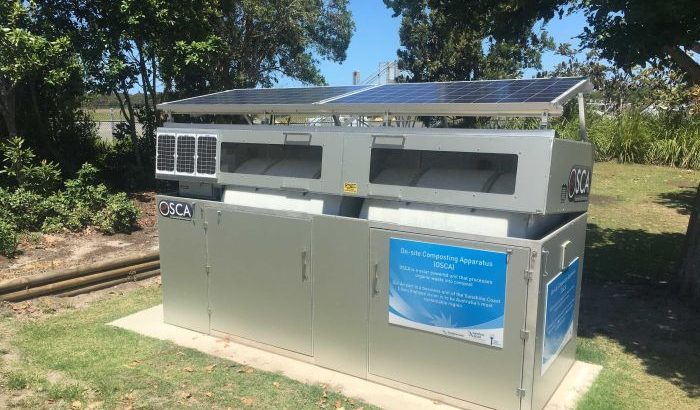 “It certainly is, yes, and we are happy to say it has been designed here in Australia and running entirely on solar,” said Penny Mitchell, from Palmwoods on the Sunshine Coast.

Waste material is put into two bins that rotate with the power of the sun, breaking down the matter with time.

“We are getting quite a bit of interest, we have had enquiries from [companies in] India and New Zealand and a few other places,” she said.

“A lot of the people are interested in their sustainability but we also sell them to schools and universities who are educating the population about waste.”

Griffith University in Brisbane recently purchased one for food waste, while the Sunshine Coast Airport has installed one in an attempt to reduce its carbon footprint.”

“Sunshine Coast Airport has treated 14,500 litres of waste so far and turned into compost to be used on the gardens surrounding the airport.

“We have actually reduced significantly the amounts of trucks we have going to landfall and we have had to double the amount of trucks going to the recycle depo,” Mr Pallott said.

The airport has named the machine On-site Composting Apparatus, or OSCA, based on the Sesame Street character Oscar the Grouch, who lives in a bin.”