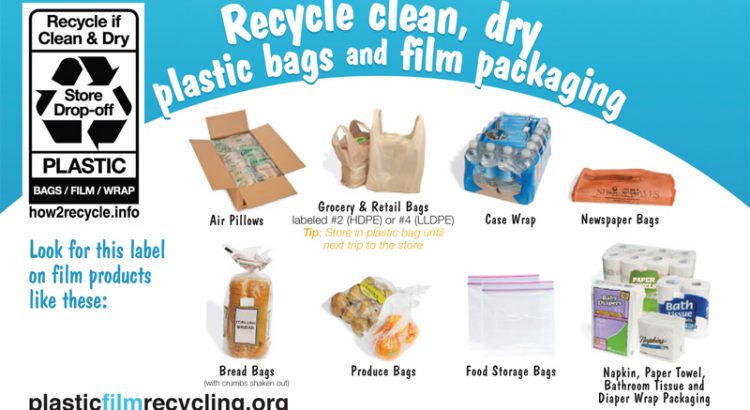 I knew we had a problem.

Every time I noticed a plastic bag on the street, read a notice from my municipality not to include plastic bags in the recycling bin and every time I disposed of a bag (with a guilty conscience).

I had guessed that we weren’t achieving 20 percent recycling of plastic bags and film.

We are only recycling 15 percent of plastic bags and film.

We must do better!

I have been trying hard to do better and have.

For some time I have been using cloth bags for my grocery shopping probably achieving about 90 percent success.

I also return my plastic bags.

I urge you to do the same and urge your friends to do so.

“Thirty-four million more pounds of plastic wraps, bags and other film packaging were recycled in 2015, a 3 percent increase relative to 2014, according to “2015 National Post-Consumer Plastic Bag & Film Recycling Report,” which the American Chemistry Council (ACC) released during the Plastics Recycling Conference, organized by Resource Recycling, March 6-8 in New Orleans. Nearly 1.2 billion pounds of these materials were recycled in 2015. This marks the 11th consecutive year of increases and the highest annual collection of plastic film since the survey began. Plastic film recycling—a category that includes flexible product wraps, bags and commercial stretch film made primarily from polyethylene (PE)—has increased nearly 84 percent since the first report was issued in 2005, the ACC says.

The “2015 National Post-Consumer Plastic Bag & Film Recycling Report” also found that film processing in the United States and Canada increased 11 percent for the year, while exports declined by almost 4 percent.

Through the partnership, EPA and ACC will work together to:

“We are looking forward to collaborating with ACC to reduce environmental impacts from plastics,” says Barnes Johnson, Director of EPA’s Office of Resource Conservation and Recovery. “We believe that there are great gains to be made for the environment, our society, and our economy by working together with the ACC on this important issue.””

For those in NC.

“You shouldn’t worry too much about these plastic bags ending up in the landfill. There’s demand from companies that need the material to produce composite lumber, pellets and resins.

The manufacturers use grocery, retail and newspaper bags; bags labeled with No. 2 or No. 4; and the wrapping around paper towels and toilet paper.

They don’t collect food wrapping or other contaminated material.

Trex, a composite lumber manufacturer, collects about 200 million pounds of plastic material each year in the United States, said Dave Heglas, director of material resources. North Carolina is one of five states that collect the most material, he said, with most of that coming from Harris Teeter and Ingles grocery stores.”

You can search for the nearest recycle center and learn more about what can be recycled here: